The 2018 Republican primary is fast approaching, and the gubernatorial matchup between Congresswoman Kristi Noem and Attorney General Marty Jackley is close – a dead heat according to public polling. It could be a late night Tuesday as the results roll in, in what could could be a historically close primary.

The good news for enthusiastic Election Night watchers is that all ten bellwether counties are East River and in the Central Time Zone, meaning results can start rolling in at 8 PM CT. Here are the Top 10:

For each county, the % for each election year is the average amount that the county’s result for each candidate differed from the statewide result. For example, if Candidate A over-performs in a county by 3%, Candidate B under-performs by 12%, and Candidate C over-performs by 9%, the county’s score for that election is the average of those three percentages: 8% in that example. The overall “modified average” is based on the five primary election scores: I gave each county one “mulligan” and threw out the worst (highest) score for each county, averaging the other four. That removes scores that are outliers, usually due geographic factors relating to the candidates. (For example, Beadle County’s high score in 2002 is because it is the ancestral home of the Rounds family.)

Here is a map that shows, graphically, the modified averages for all 66 counties (lighter color designates a lower score, and therefore a better bellwether): 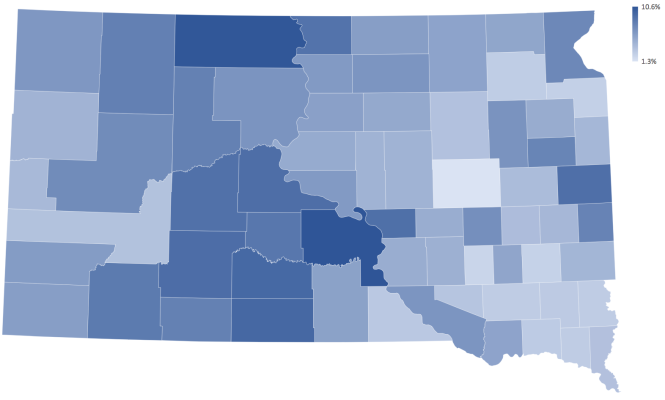 I also tried a simpler methodology: In these five primaries, how many times did each county vote for the winner? Beadle and Davison counties are among those that are a perfect 5/5 (along with Day, Grant, Kingsbury, Lincoln, Marshall, Minnehaha, Moody and Turner):

Both maps show that West River counties tend to be poor bellwethers. They are sparsely populated and unlikely to tilt an election, and often vote for candidates who appeal specifically to ranch country, such as Walter Dale Miller or Clint Roberts. Pennington County, with a larger and more urban population, is an exception; by the first methodology, it is actually a better bellwether than Minnehaha County.

As a reminder, here are the candidates who ran in each of these five primaries:

And finally, here is the ranked chart for all 66 counties, including the Top 10 stated above:

Oglala Lakota County was known as “Shannon County” until 2015 but is referred to by its current name throughout this post.